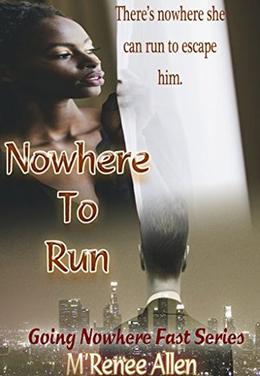 How did a text message lead to blood on her hands?

Melanie Pittman never should’ve responded to the message her boss sent, demanding she join the festivities at his mansion. With her job on the line, she showed up, only to flee moments later, covered in her boss’s blood.
And his son had watched her flee.

She’d known his willingness to not turn her in was too good to be true. Now he’s blackmailing her: sex for silence. The only thing making this situation worse was the fact that she enjoyed the things he did to her. The way he handled her body, the dirty things he said to her, she loved it all, even though she knew he would never think of her as anything other than a toy he could play with, manipulate. He held her freedom in his hands.

What will it take to keep him silent?

This is a bwwm suspense with romantic elements. It contains graphic scenes and multiple character point of views. For adults only. Ends with a cliff hanger. Book 2: Nowhere To Hide coming in July.

There was no alcohol in her home. Right now, she wished she was a drinker and kept a bottle stashed away. Coffee was out of the question. She didn’t want to stay awake after he left. She wanted to pass out and forget this day ever happened.

All she had was Kool-Aid and orange juice. Perhaps she should just take some Nyquil. That would put her to sleep. It wouldn’t make her forget what happened tonight though. She needed to forget, for a little while. Melanie slammed the refrigerator shut.
Her fridge was just as pitiful as she was.

“Don’t take your anger out on the refrigerator.”

Melanie swung around to see Mason standing in the kitchen archway, zipping his pants up. She ignored the granite six pack of his abdomen and instead chose to stare at his face, his evil blackmailing face.

“You should be in a better mood,” he told her.

He folded his arms over his chest and leaned against the wall. His lips lifted in a grin. He looked as if he didn’t have a care in the world and here she was depressed and needing a gallon of vodka. Did they even sale vodka by the gallon?

“What’s wrong? Do you think I’m going to rat you out now that I’ve f*cked your mouth?”

“Must you be so crude?” Melanie leaned against the refrigerator. Why did he have to talk so dirty?

“Crude? If you think that’s crude, you’re going to faint when you hear of all the nasty things I want to do to that sweet little body of yours.”

Melanie stared down at the floor. “How long do I have to do this for you?”

“We’ll talk about that later.” Mason walked in her direction.

She moved away from the fridge. He stepped in front of her and ran his finger over her cheek. “You did good tonight?”

Really? She killed his father tonight. How was that good? That was horrible. Even if she didn’t go to jail, she was going to rot in hell for her sins. She needed to go to church, that was what she needed to do. She hadn’t been to church in years, not since her grandma was placed in the nursing home.

“Did you hear me, Melanie?”

She blinked and returned her attention to him. “I’m sorry, what did you say?”

He frowned. “When I’m with you, I want you to focus on me. Nothing else matters, understood?”

No. Still, she nodded.
more
Amazon Other stores
Bookmark  Rate:

'Nowhere To Run: BWWM Romantic Suspense Novel' is tagged as:

All books by M'Renee Allen  ❯