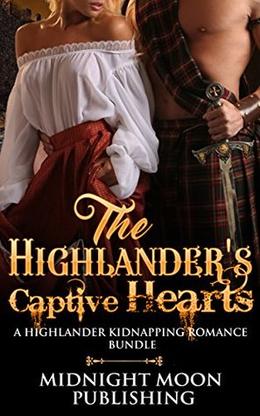 Enjoy 16,000+ words of Scottish Highlander Romance, and get two books for the price of one!

A STEAMY ROMANCE COLLECTION IS INCLUDED INSIDE FOR A LIMITED TIME!

Taken Captive by the Highlander

Luna Everly has never believed in conventional thinking. She had always gone her own way, but then she married Henry and everything changed. Her independence was stunted and she was expected to stay in the kitchen and out of the social limelight. Her husband was boorish, ridiculed her for creative spirit and when she tried to speak out, her complaints would fall on deaf ears. She thought that she was trapped in a loveless marriage, until that fateful day that the highlanders raided their castle and the surrounding area.

Luna saw the death and destruction and then was taken prisoner by Conner and the clan of Patrick. She at first resisted his advances and found him brutish. It wasn’t long, until she sees his vulnerability that she realizes that being captured might’ve been the best thing that could’ve ever happened to her.

Kidnapped by the Highlander Lord

Abbie was once the most beautiful girl in her small village in the Scottish highlands, but years of being married to the hero Callum have taken their toll. Celebrated for his deeds in battle, people turn a blind eye to Callum’s treatment of his wife Abbie, and every day her light shines a less brightly. But then, in the dead of night, she is kidnapped by a rival clan and thinks her life is in danger. Yet all is not as it seems when she meets Duncan, the leader of Callum's enemy clan. With her loyalties being tested she finds a new lease of life and the possibility of a second chance, but how long will it last when Callum is leading a charge to get her back?


Read now and receive a free gift at the end of the book!


WARNING: This ebook contains mature language and content. It is intended for 18+ readers only!
more
Amazon Other stores
Bookmark  Rate:

'The Highlander's Captive Hearts: A Scottish Pregnancy Romance Bundle' is tagged as: