Love is a Moment (A LOVE FOR ALL SEASONS #4) 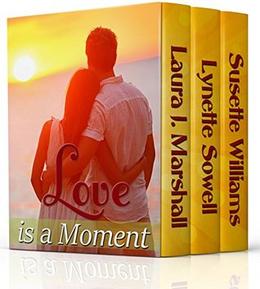 Love is a Moment Collection
99¢ Special
FAITH, LOVE AND FRIED CHICKEN: SUMMER~ Laura J. Marshall
Excitement. That's what Jaycee has been saving for since high school. With plans to leave rural Twain, Georgia, the "to where" and the "to what" have been the only questions stopping her. Will her intentions change when Dash Matheson pulls her wandering heart in his direction? Feel the summer heat of the Fourth of July in this southern series as Jaycee finds love.

TIME AND TIDE ~ Lynette Sowell
Karyn Lewis only plans on helping out for the summer season at Pine Breezes Campground just outside Chincoteague, Virginia. After losing her staff writer job at a Manhattan fashion magazine, she's out of money to stay in the bid city. She plans to avoid her past in Chincoteague as much as possible, but ends up facing the tragedy that drove her from the coast years ago. Brodie Reed’s life is deeply ingrained in the island as a volunteer fireman and local contractor. Everything he does is to make a good life for his young daughter, Trista. Raising her without a mother has been hard, even with the help of his family. When Karyn returns to town, their paths cross again. This time, their hearts are involved. How will they make the decision to love without fear, and let time heal the wounds of the past?

HEATED SUMMER ~ Susette Williams, USA Today Bestselling Author
Margaret Stephens has her sights set on marrying a man with a promising future. Nicholas Alexander is definitely not that man. His boyish charm isn’t going to sidetrack her; not that he appears to want to. Nick’s judgmental manner irks her because he doesn’t know her…not well enough to condemn her.

Nicholas has seen enough gold diggers like Maggie. The purrfect little kitty who warms up to rich guys. Then when the unsuspecting bums marry them…they find kitty has claws. He’s already been scratched and isn’t about to make the same mistake twice.

Margaret doesn’t plan on ever going hungry again. A visit to the orphanage brings up a past she keeps trying to forget. To Nicholas, it’s a reminder of all the things he has to be thankful for and he hopes that Margaret will come to appreciate all that she has.

Can two people from different sides of the track meet somewhere in the middle? It’s a rough ride till they find out.
Will some munchkins playing matchmaker be able to bring Kelly and Marc together? Or will love’s ember never have the chance to be ignited?
more
Amazon Other stores
Bookmark  Rate:

'Love is a Moment' is tagged as:

The 'A LOVE FOR ALL SEASONS' series

Similar books to 'Love is a Moment'

All books by Susette Williams  ❯

Buy 'Love is a Moment' from the following stores: