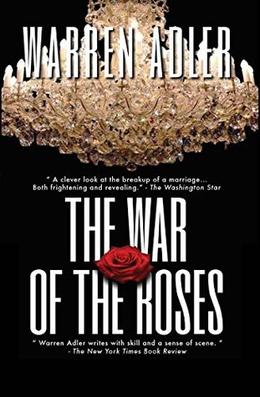 The War of the Roses has overtime emerged as a synonym for modern divorce and its emotional aftershock. Since its publication it has spawned numerous film and stage adaptations, endless discourse on the dynamics of divorce as well as becoming part of the legal jargon describing the proceedings that follow.

Adler's iconic tale takes us from suburban bliss to an deadly territorial battle. Jonathan and Barbara Rose are at first glance the perfect couple. Jonathan has a stable law career; Barbara is an aspiring gourmet entrepreneur with a promising pâté recipe. Their large home holds the rich antique collection that originally brought them together, as well as the loving familial bond that intertwines them with their children Eve and Josh.

When Jonathan finds himself suddenly gripped by what is presumably a heart attack and Barbara confronts the loveless spell lingering between them, the sun-soaked sky that was once the Rose family union drifts into a torrential downpour. Their mutual hatred becomes ammunition in a domestic warfare that escalates in the most unpredictable ways while they helplessly eye their dwindling nuptial flame. In the chaos that unfolds Adler allows a moment of much needed contemplation on the shape of today's matrimonial bonds.

The War of the Roses illuminates the relationship-shattering materialism, contempt and selfishness of husband and wife by posing a timeless question, how far are we willing to allow our material possessions the power to define who we are? Are today's marriages haunted by the struggle to get even?
more
Amazon Other stores
Bookmark  Rate:

'The War of the Roses' is tagged as:

The 'The War of the Roses' series

Similar books to 'The War of the Roses'

More books like 'The War of the Roses'   ❯

Buy 'The War of the Roses' from the following stores: