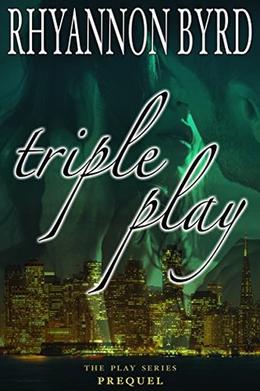 One woman.
Two men.
And a passionate hunger too long denied.

It's Gabriel Harrison's thirty-fifth birthday. His quiet night at home, spent alone with a glass of Scotch and a novel, is about to be shattered.

Gabriel's best friend, Jonah, comes knocking at his door, bearing a gift unlike any other--a blindfolded Denny Abbott, the lush little assistant Gabe can't get out of his head. He aches for her with a primitive, physical lust and tearing emotional hunger that eats at his soul, and yet he will not touch her. He will not reach out for the one thing in this world he wants above all others. For Gabriel has a secret--one he believes makes him unworthy of the sweet, shy Denny.

What Gabe doesn't know is that Denny has a backbone of steel and the sheer determination of a woman in love. With Jonah leading the way, the three embark on a provocative, sensual assault to shatter that infuriating wall of ice surrounding Gabriel's heart. Before the night ends, Denny is determined to melt his resistance...and make the "Ice Man" burn .

Note: TRIPLE PLAY is meant for readers 18+ due to mature content.
(2nd Edition)

'Triple Play (Play)' is tagged as: