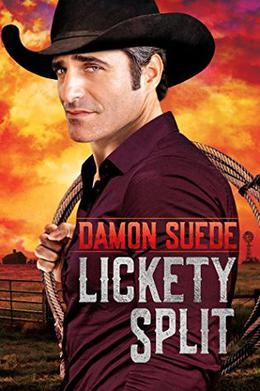 Patch Hastle grew up in a hurry, ditching East Texas for NYC to make his name as a DJ and model without ever looking back. When his parents die unexpectedly, he heads home to unload the family farm ASAP and skedaddle. Except the will left Patch’s worst enemy in charge: his father’s handsome best friend who made his high school years hell.

Tucker Biggs is going nowhere. Twenty years past his rodeo days, he’s put down roots as the caretaker of the Hastle farm. He knows his buddy’s smartass son still hates his guts, but when Patch shows up growed-up, looking like sin in tight denim, Tucker turns his homecoming into a lesson about old dogs and new kinks.

Patch and Tucker fool around, but they can’t fool themselves. Once the farm’s sold, they mean to call it quits and head off to separate sunsets. With the clock ticking, the city slicker and his down-home hick get roped into each other’s life. If they’re gonna last longer than spit on a griddle, they better figure out what matters—fast.
more
Amazon Other stores
Bookmark  Rate:

'Lickety Split' is tagged as:

All books by Damon Suede  ❯