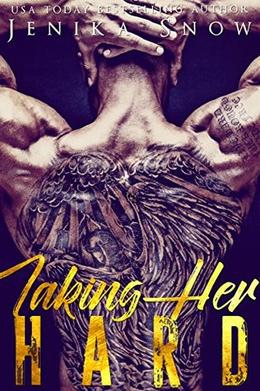 She was his even if she didn’t know it.

Vain had never been one for happily ever afters, true love, or the bullshit that comes with having an old lady. He cared for his club, was loyal until he bled, and that’s all he needed in life.

But then Lizzy came into his life and all that changed. He kept his mouth shut, focused on the MC, and told no one about his feelings, least of all the girl he loved. When Lizzy left he didn’t need or want anyone by his side. She’d been it for him and he let her walk away.

And now she’s back. Lizzy is young and innocent, and he’s too much of a bastard for her. She’s the sister of one of his biker brothers, and Vain knew going down that road would only lead to lines being crossed.

But he wanted her, and he’d have her.

With her life in the gutter and nowhere else to turn, Lizzy had no choice but to seek out her brother for help. It’s been years since she left the protection of the MC, and it’s all because she thought she didn’t want that life surrounding her. But the truth is she ran from her feelings for a certain biker.

And then she sees him, the man she loves… Vain. When their feelings come out in the open, she doesn’t know how the end will look. Being with him could cause trouble for the other bikers, could cause a rift in their brotherhood. But for the first time in her life she feels good and wants to see the outcome, wants to be happy.

Vain says she’ll be his, and Lizzy has no doubt that’s the truth. At the end of the day she can’t fight him… Because she doesn’t want to.

Warning: The title pretty much guarantees what you’re getting yourself into. Rough, filthy, short, and totally over-the-top, this hero is all about making sure his woman is pleased in all the best ways. This is a drama free book, so enjoy the dirty ride.
more
Amazon Other stores
Bookmark  Rate:

'Taking Her Hard' is tagged as:

Similar books to 'Taking Her Hard'

Buy 'Taking Her Hard' from the following stores: