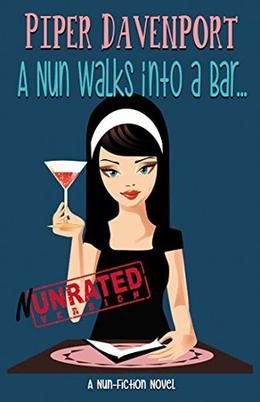 After growing up in an abbey, orphan Sadie Ross becomes Sister Abigail Eunice. Her life and career are on track until a chance meeting with a handsome stranger in a place no nun should ever go.

Ryder Carsen’s sister is missing, and he doesn’t have time for distractions. But when a pretty nun walks into his bar, he can’t ignore his attraction to her, even though she’s not the “sister” he’s looking for. He’s relieved when she walks out of his life for what he believes is forever.

Sadie’s life takes a surprising detour when she finds her path crossed with Ryder’s once again.

When they are brought back together, Ryder knows he’s found the only woman he’ll ever love, but time is running out for his sister.

Will Ryder save his sister from the men who took her?

When a source far too close to home threatens Sadie, will she trust Ryder enough to let him save her too?

'A Nun Walks into a Bar' is tagged as:

Similar books to 'A Nun Walks into a Bar'

More books like 'A Nun Walks into a Bar'   ❯

All books by Piper Davenport  ❯

Buy 'A Nun Walks into a Bar' from the following stores: