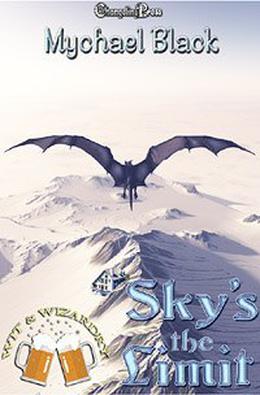 Despite his last name, Kelly Snow despises winter. He hates being cold and tromping through snow and ice. So, naturally, he's called to inspect and catalogue a hermit's vast library... in the mountains.

Dregan Stone has been around long enough to amass an enormous collection. Instead of gold and jewels, however, his hoard is made entirely of books -- so many he's lost track of what he actually has. He needs help getting his hoard organized, so a friend recommends a librarian.

Kelly and Dregan couldn't be any more different, but neither man can deny the bizarre magnetic attraction between them. Dregan refuses to believe what it means, but that's the least of his worries. What happens when Kelly discovers just what sort of man he's working for?
more
Amazon Other stores
Bookmark  Rate:

'Sky's the Limit' is tagged as:

The 'Wit and Wizardry,' series

Similar books to 'Sky's the Limit'

All books by Mychael Black  ❯

Buy 'Sky's the Limit' from the following stores: