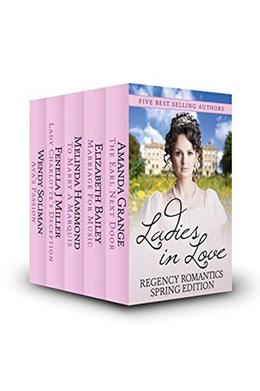 A Collection of 5 Regency Romances from Bestselling Authors
The Earl Next Door by Amanda Grange
When Luke, Lord Ravensford, moves into the neighbouring estate, Marianne is horrified by the rumours that he has ruined her missing brother. But the truth is very different, and a shared danger reveals hidden depths to Luke and his profound feelings for her.
Marriage for Music by Elizabeth Bailey
When Lily Daubney meets Lord Wintringham of wild reputation, she little expects a proposal of marriage. But Vincent is in need of a wife to break the codicil in his father's will and no respectable debutante will take him. Why not instead a poor relation with nothing to recommend her but artistry as a pianist? The marriage of convenience very soon turns into something else, but can Lily change her wild lord into a proper husband?
To Marry A Marquis by Melinda Hammond
England 1803: Elliot Malvern, seventh Marquis of Ullenwood is very content with his bachelor lifestyle, spending his fortune on the pleasurable pursuits of gambling and mistresses. Rosamond Beaumarsh is determined to remain unmarried and independent. But when the pair embark upon a romantic adventure, they learn that rational thought has very little to do with true love.
Lady Charlotte's Deception by Fenella J Miller
Determined to fulfil her promise to her friend, Charlotte defies her brother and sets out on a journey in secret. But the person most at risk is herself, as circumstances conspire to leave her helpless in the care of a stranger. Dr James Hunter is a modern man, with no love for the aristocracy. When he discovers Charlotte's deception will it destroy their love?
Ava's Passion by Wendy Soliman
Determined to avenge the death of her sister, Ava Molineux recklessly searches for evidence to condemn Sir Andrew Maddox. Rescued from a near-certain death by Theo Farnell, the Earl of Highgate’s brother, Ava is unsure whether she can trust her handsome saviour.
Fighting his own demons, Theo struggles to deny his growing attraction towards Ava as he attempts to save her from her own folly and Sir Andrew’s tenacious grasp. Will he succeed with any of those ambitions?
more
Amazon Other stores
Bookmark Rate Book