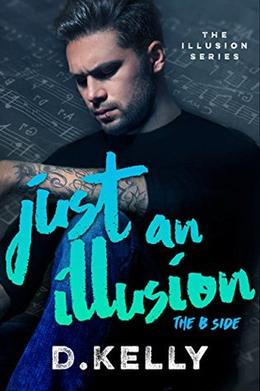 Three life-altering months …
That’s how long it’s been since Amelia Greyson joined the Just an Illusion Tour with Bastards and Dangerous. She’s made new friends, embraced her past, and even found love.
Back on the road …
Following a tragic situation, Amelia is determined to hit the road, put her life in order, and finish the book she was hired to write. Mel’s not the only one affected by what happened; the men of BAD are all trying to move forward, not wanting the past to ruin the remainder of their farewell tour.
Brother vs Brother …
Tensions are high on the Weston brothers’ bus. As each brother settles into their role in Amelia’s life, secrets threaten to rip their relationship to shreds. Can Noah and Sawyer find a way to save the brotherly bond they share? Or will the woman of their dreams end up tearing them apart for good?

'Just an Illusion - The B Side: The B Side' is tagged as:

The 'The Illusion' series

Similar books to 'Just an Illusion - The B Side: The B Side'

Buy 'Just an Illusion - The B Side: The B Side' from the following stores: