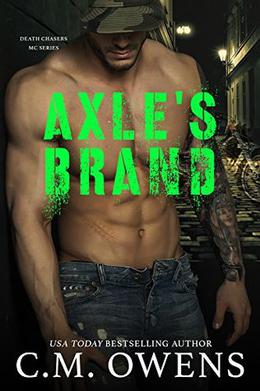 Fate is just a made-up word used to give us hope or absolution. We find hope when we believe bad things happen to us for a reason. We find absolution when we feel as though the wrongs of our past were just fate’s twisted design to bring us to our present, and all of it was out of our hands.

Of course, I sort of change my mind after meeting Axle. The man with scars and haunted, cold eyes. The man who only warms when he is around me. The first man I believe won’t cost me my life. The first man I’ve ever believed to actually be honorable, despite the fact he’s a ruthless criminal.

Only the craziest of fates could have put us in the paths of each other. More of a collision course, really.

Life gets complicated. Shit happens. And I sort of fall harder than I thought possible.

The first time we met, I was in my pajamas and cowering on the floorboard of his SUV, hiding from my very insane brother. Lovely first impression, I assure you.

The second time we met, I was literally skating around a bunch of corpses, because I’m slightly crazy like that. Long story.

Obviously my second impression had just as much impact as my first. Because he fell head-over-heels in love with me in that instant.

Kidding. That last part is complete bullshit. Axle is far more complicated than insta-love nonsense. Which is one of my favorite things about him.

Everything about us is perfectly complicated and wonderfully disastrous.

It’s what every girl dreams of…as long as they’re as crazy as I am.

And I’m just crazy enough to hold on, because I don’t mind being the psycho chick in roller skates, who is flipping fate the bird when it tries to intervene again. It’s just one of my quirks. Turns out, I’m Axle’s brand of crazy too.

Life should be really freaking interesting. Or catastrophic. Or psychopathic.

I guess it depends on how much madness you can embrace.

*Not fit for someone who loves rainbows in books. Never mind. There’s a rainbow in here. <3
more
Bookmark Rate Book
Amazon Other stores

Wilder
Wilder
(The Wild Ones #3)