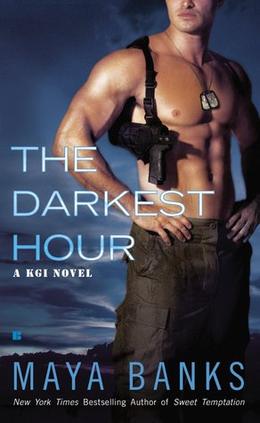 It’s been one year since ex-Navy SEAL Ethan Kelly last saw his wife Rachel alive. Overwhelmed by grief and guilt over his failures as a husband, Ethan shuts himself off from everything and everyone.

His brothers have tried to bring Ethan into the KGI fold, tried to break through the barriers he's built around himself, but Ethan refuses to respond...until he receives an anonymous phone call claiming Rachel is alive.

To save her, Ethan will have to dodge bullets, cross a jungle, and risk falling captive to a deadly drug cartel that threatens his own demise. And even if he succeeds, he’ll have to force Rachel to recover memories she can’t and doesn’t want to relive—the minute by minute terror of her darkest hour—for their love, and their lives, may depend on it.
more
Bookmark Rate Book
Amazon Other stores

Similar books to 'The Darkest Hour'

All books by Maya Banks  ❯

Buy 'The Darkest Hour' from the following stores: