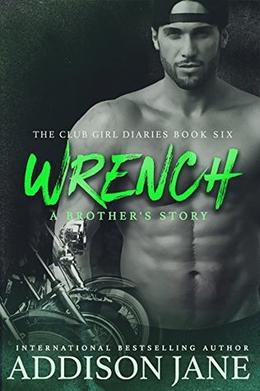 If there were skeletons in your closet, Wrench would find them.
The skills he possessed had landed him in jail on more than one occasion. But he would continue to do whatever he had to in order to protect his family—the Brothers by Blood MC. If that meant time behind bars, so be it.
He never thought his loyalty to the club would falter.
He thought wrong.
When Sugar—the mother of his president’s daughter—returned, he knew she was off limits. Her strength and beauty pulled him in though, and the closer they got the more broken pieces of her soul he discovered.
He wanted to fight for her, to put her back together.
But he needed to make a decision—loyalty or love—before he lost both.

Sugar came from money but she had never let it define her.
As she grew older she was treated like an outcast and eventually, the people who were meant to care for and support her threw her to the wolves.
She'd spent years trying to build herself back up, to fight for a life that she deserved and to prove everyone wrong. But there were things that still haunted her, secrets that she knew she couldn't hide forever.
Coming back to the club was a risk she had to take to give her daughter the family she'd never known.
When her demons rear their ugly face, Wrench is right there beside her. She felt secure and protected in his arms, he saw the truth inside her and he didn't run.
But the secrets and lies were building, and they had the power to crush the people they cared for.

With the past and the present about to collide, how far will they both go to protect their family’s future?
more
Bookmark Rate Book
Amazon Other stores

The 'The Brotherhood Journals' series

All books by Addison Jane  ❯

Buy 'Wrench' from the following stores: