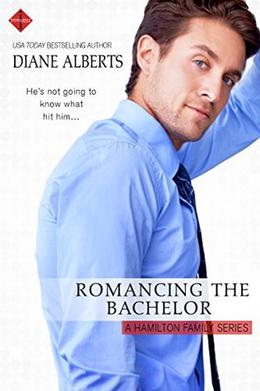 Eric Hamilton isn’t looking for love. Hell, he isn’t even looking for a girl. He has a five-year plan, and he’s one hundred percent focused on that. But then Shelby walks into his life, and suddenly, he can’t think about anything else. Unfortunately for him, she hates his guts, and wants nothing to do with him. But he’s a man who loves a challenge.

Shelby Jefferson can’t wait to get out of the city, and back to her country roots. She moved to Atlanta for a guy who promptly left her, and the last thing she wants is to fall for another man who might make her want to stay. But Eric is nothing if not persistent, and before long she’s inside his arms, in his bed, and falling for him. Hard. But when history repeats itself, she’s left having to choose between a man and herself…again.

'Romancing the Bachelor' is tagged as:

Similar books to 'Romancing the Bachelor'

All books by Diane Alberts  ❯

Buy 'Romancing the Bachelor' from the following stores: