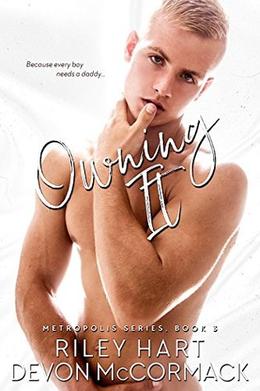 Just out of an eighteen-year marriage, the last thing Jackson expects the first time he visits a gay bar is for a sexy, drunk twink to mistakenly climb into his Jeep. The twink part he’s good with, the drunk part…not so much. As far as Jackson’s concerned, the boy should come with a warning label. But Derek is not as flighty as Jackson thought…he’s actually pretty incredible. Getting to know the wild, funny man is a breath of fresh air. And when Derek calls him Daddy? Christ, he never thought something like that would feel so right.

Derek has serious daddy issues, and his name is Jackson. He’s stubborn and controlling…and ever since Derek woke up in the silver fox’s condo, he can’t get Jackson out of his mind. Maybe because no matter how many times he throws himself at him, Jackson doesn’t take the bait. And maybe because Jackson is the one person who sees him for who he really is. But Derek loves a challenge, and he’s eager to rock Jackson’s world.

Jackson isn’t interested in a meaningless hookup. He wants the real Derek, not just the sassy jokester everyone else sees. But it’s not easy for Derek to open up. He feels much safer guarding his heart. And Jackson needs to figure out the balance between living for himself and the mountain of responsibilities weighing him down. Derek and Jackson must find the common ground between hookup and commitment—if they can’t own their issues and work together to overcome their faults, they could smother the flame between them that’s just beginning to ignite.
more
Bookmark Rate Book
Amazon Other stores

Similar books to 'Owning It'

All books by Riley Hart  ❯

Buy 'Owning It' from the following stores: