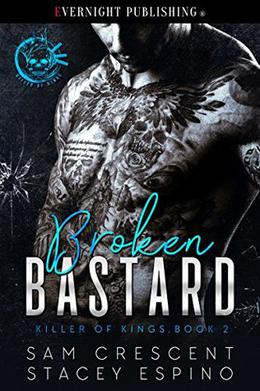 No mercy. No pity. No women.

Bain has always worked solo, refusing to allow anyone to lord over him. His life has been fucked up enough, and he’s learned trust comes with a price. When he finally accepts an invitation to work for Killer of Kings, he regrets the decision after his first contract. It was supposed to be simple, now there’s a curvy little temptation tied up in his basement.

Scarlett struggles to move up in a career where appearances are everything. When she lands a risky interview with a known crime boss, she hopes it will be her big break as a reporter. Instead, she’s caught up in the middle of an assassination and taken hostage by the hitman. She wants to hate the tattooed devil, but finds herself intrigued by his story. Is it the reporter in her wanting to know more…or the woman falling for a broken man?

Praise for Taking Her Innocence:

"Prepare yourself ...…this book is intense! Wow! Hello! This book is crazy good! Viper is pure sex on legs. He’s gorgeous but he’s got that dark side that makes him extremely dangerous. I love the plot, it’s a romantic suspense burst. It’s splattered with sex scenes that had me very nearly drooling over my ereader. Seriously. Fans self. If you like dark romance, then Taking Her Innocence should be at the top of your TBR pile!" —TBR Pile Reviews
more
Amazon Other stores
Bookmark  Rate:

'Broken Bastard' is tagged as:

The 'Killer of Kings' series