Lightning Strikes Twice (The Heart of a Hero #3) 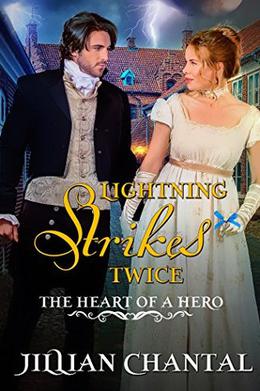 Hester (Hetty) Hale is not like other girls of her age. She’s already fallen in love and has no desire to make the rounds on the marriage mart. The problem is she’s chosen a man of science. One her father would never consider a suitable match. There’s another unsurmountable issue: the man acts as if she’s invisible.

Laurence Fortescue is not all he seems. On the surface, he’s a lecturer at Oxford with a scientific mind. Hetty’s father admires his work and allows Laurence to use his personal laboratory for experiments. Laurence tolerates the girl hanging around but rarely notices her as he’s wrapped up in his tests.

When she’s struck by lightning recreating Ben Franklin’s experiment and a gentleman she hates is allowed to court her, she turns to Laurence for assistance. Assistance he’s willing to give as that gentleman is someone he suspects is a spy. For France.
more
Amazon Other stores
Bookmark  Rate:

'Lightning Strikes Twice' is tagged as:

The 'The Heart of a Hero' series