No Hiding for the Guilty (The Heart of a Hero #4) 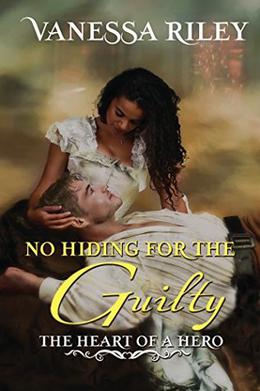 The military leaders of the fraught Almeida Seige are dying, but not fast enough for a chef with a grudge to bear and axes to sharpen. Using her position as cook to the famed inventor, Lord Hartland, Isadel Armijo learns that one of the butchers responsible for slaughtering her family will sup at Hartland Abbey at month's end. The chef is determined to serve the guilty man his last meal, one with a cake possessing a controlled detonation so she can watch him die. Only one person can teach her how to whip eggs with black powder, Wellington's hulking explosives expert, Hugh Bannerman. Can she convince the recluse to return to society to help avenge her family with a dessert to-die-for?
With his soul in torture for the lives his actions have decimated, Hugh Bannerman is convinced his sins have manifested into leprosy. As the surviving member of his family, how can he take his place in society knowing his uncontrollable anger increases the spots discoloring his skin and puts others at risk? No, he’ll remain in hiding until the Almeida Killer finds him or the incorrigible chef Isadel causes too much trouble, concocting a deadlier course, one part hope, a sprinkle of crazy, and a maddening sauce of desire.
Can two very different people find the recipe to right the wrongs of the past or forever remain prisoners to guilt?
more
Amazon Other stores
Bookmark Rate Book

The 'The Heart of a Hero' series

Similar books to 'No Hiding for the Guilty'

More books like 'No Hiding for the Guilty'   ❯

Buy 'No Hiding for the Guilty' from the following stores: