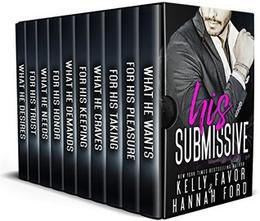 What He Wants by Hannah Ford (Books 1-7)

Twenty-one-year-old law student Charlotte Holloway isn’t the type of girl to lust after things she can’t have. But when she starts working for the sexy and mysterious Noah Cutler, Charlotte can’t help but dream about the gorgeous billionaire, even though she knows it’s just a fantasy. Men like Noah – gorgeous, dark, and driven-- usually aren’t interested in women like her.

Noah Cutler is a man who doesn’t take no for an answer. His drive to go after exactly what he wants has made him one of the most powerful men in the city. And while he could have his pick of any woman, his sights are set on Charlotte. And he won’t stop until he’s taken control of every inch of her deliciously curvy body…


For His Pleasure by Kelly Favor (Books 1-8)

When twenty-two-year-old Nicole Masters gets a highly coveted internship working for one of the largest advertising companies in the world, she can't believe her luck. But Jameson International isn't just any company. It's owned by thirty-two-year-old business mogul and celebrity, Red Jameson.

Red is known for his high-flying lifestyle; dating models and hanging with the rich and famous.

The powerful billionaire can have any woman he wants, and the naive college graduate can't imagine making much of an impression on her new CEO. But when Red Jameson takes notice of her and invites her up to his secluded office one day, everything changes.

As it turns out, the powerful businessman also has a voracious sexual appetite, and it's been whetted by none other than Nicole herself. And Red needs to be in charge at every turn.

Nicole isn't just any girl though, and Red Jameson's shocked to find that the young intern is more than a match for him in a battle of wits and will.

'His Submissive (Fifteen Volume Box Set)' is tagged as: