SOMEWHERE for a Hero to Hide (Finding SOMEWHERE #3) 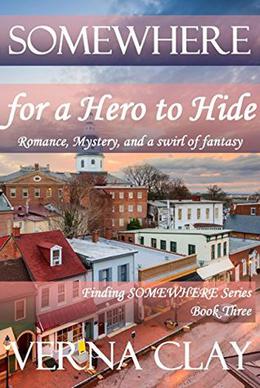 Nestled in a cove on Oregon's coastline, the town of Somewhere is charming, picturesque, inhabited by townsfolk who love their community--and teeming with mystery. You are invited to join the heroes and heroines of Somewhere as they solve mysteries, discover romance, experience inexplicable phenomena, and fight injustice...just the usual stuff!

SOMEWHERE FOR A HERO TO HIDE
Dutch Mulvaney, a hero who will spend the rest of his life in a wheelchair, now carves sea creatures from driftwood and signs them as "Beach Bum." His relocation from the East Coast to the small coastal town of Somewhere in Oregon was a desperate attempt to salvage his sanity and dignity. Now, after a year of solitude, he finally feels ready to venture back into society.
Taylor Jones enjoys her job as a waitress at Mama Pink's Diner, the most popular eatery in Somewhere. Daily, she thanks the universe for Edna Pink, the owner. Without Edna's help, Taylor could very well be six feet under, with her two precious sons being raised by a crime boss. Previous to her current job she'd been on the run for years, waitressing here and there, using fake IDs. When a disabled man enters the diner, she gets a premonition that her life is about to change. Should she remain in the town she loves, or run yet again?

Not intended to be read as a standalone.
more
Amazon Other stores
Bookmark Rate Book

Similar books to 'SOMEWHERE for a Hero to Hide'

More books like 'SOMEWHERE for a Hero to Hide'   ❯

Buy 'SOMEWHERE for a Hero to Hide' from the following stores: