Honeymoon With a Prince (Royal Scandals #2) 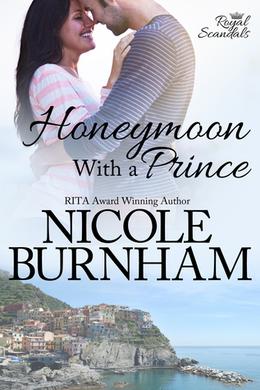 After dumping her rich, lying louse of a fiancé, designer Kelly Chase opts to take her honeymoon solo. What better chance to nurse her wounds in solitude than two weeks of pre-paid beachfront bliss on the breathtaking Mediterranean island of Sarcaccia? Yet when she meets gorgeous local beach bum Massimo, solitude is suddenly less important than enjoying the company of an honest man … a man whose eyes reveal a private anguish.

Fresh from brutal combat, seeking privacy and a chance to heal, Prince Massimo Barrali is intrigued by the gorgeous American who fails to recognize him and treats him as an equal. He offers her dinner, but dinner quickly turns into a night of intense passion…until the police come knocking on the door of Kelly’s rented villa.

Kelly’s horror at the discovery her fiancé stole her honeymoon fund turns to humiliation when Massimo arrives to post her bail. Once again, she’s been deceived by a man who isn’t what he appears. But when Prince Massimo offers her a job at the royal palace and a chance to pay her debts, she can’t refuse. She hates that she’s forced to work with him, hates the desire that still burns between them, but how can she forget the secret torment she saw in him or their sensuous night under the stars?

Don’t miss a single volume of the Royal Scandals Series!

'Honeymoon With a Prince' is tagged as:

Similar books to 'Honeymoon With a Prince'

All books by Nicole Burnham  ❯

Buy 'Honeymoon With a Prince' from the following stores: