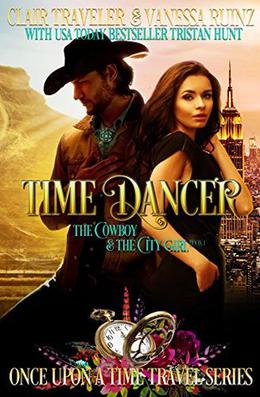 Time Dancer: The Cowboy & The City Girl Part 1 (Once Upon a Time Travel #4)

Never fall for a time-travelin' cowboy...
Especially a maverick who recklessly twists history!

A sexy cowboy from the old west,
A savvy city girl from present-day New York,
Bringing the two together is like pouring gasoline on a brush fire.

Sandia Molina is a savvy entrepreneur, recent graduate of Columbia University in New York, and running her own business when she is taken hostage in a Starbucks bathroom...by a cowboy.

Introducing himself as Caleb Wolfe, he seems nice enough for a crazy kidnapper dressed in a Halloween costume, but when he mysteriously disappears in front her very eyes as police attempt to arrest him, Sandia can think of nothing else for three long years...until the strange cowboy suddenly reappears at a loft party in Soho. Only this time, Caleb is forced to take Sandia along for the ride of her life.

Avoiding Time Travel regulators, attending Hollywood premieres, escaping the Sheriff of Nottingham and saving innocent victims from evil tyrants become the rule of the day as Caleb and Sandia dance through time. But will Sandia resist Caleb's Casanova charms and return to her life in the present before the regulators catch up with them and she's lost to oblivion?

Like Outlander set in the wild west and Pocahontas set in New York City, Time Dancer is a romance for the ages!

PLEASE NOTE: This book is the first part of a serial and is packed with nail-biting adventure, including a cliffhanger!

But don't worry, the next installment will be released in only two weeks! So tune in for the next episode!

The 'Once Upon a Time Travel' series

Buy 'Time Dancer: The Cowboy & The City Girl Part 1' from the following stores: