Wicked for Hire (Paranormal in Manhattan #1) 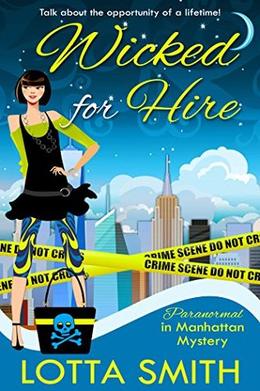 Medical student Amanda Meyers thought she had her life all planned out until people started dying the moment they touched her. Being cleared of any wrongdoing didn’t stop the medical school from expelling her, and it didn’t rid her of the unfortunate nickname Grim Reaper.

Luckily, having a rep as the harbinger of death isn’t a total resume killer. Rick Rowling, Special Agent for the FBI’s Paranormal Cases Division recruits her to work for the Bureau. But the sexy, brilliant, outrageous loose cannon proves to be just as untouchable as the mysterious creature or creatures that may be responsible for the seemingly unsolvable murder that becomes their first case together.

Instead of treating patients, Amanda’s life becomes a test of her patience and a wild ride into the wicked paranormal world where her new boss runs the show. Together they face a ghoulish force that could destroy the entire city and a grueling family dinner that could leave Amanda contemplating harakiri.

It’s a battle of life and debt [student debt, that is] and saving the world has never been so funny.
more
Amazon Other stores
Bookmark Rate Book

The 'Paranormal in Manhattan' series

Similar books to 'Wicked for Hire'

Buy 'Wicked for Hire' from the following stores: