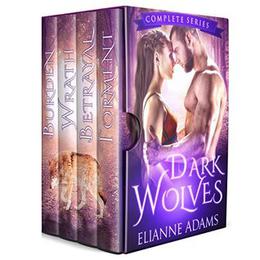 All they’d ever known was darkness. Evil gnawed at their souls, dragging them closer to ultimate damnation with every passing night. That was until one brave soul saved them all, casting them into a world of light. One they didn’t understand. One that was more frightening than the madness they’d barely escaped. Now, they had to find their way in the lands of men. With their humanity restored, it should have been easy. But darkness still lingered in their tainted souls, threatening their new-found freedom, and all those around them.

Torment:
Desperate for help, Delana turns to new—and dangerous—wolf shifters for help. Khet's inner beast eats at his soul. A broken curse. A chance at redemption. But Khet's dark soul was too dangerous to be saved. Can Delana be his salvation?
Yet when Delana comes to him, sacrificing her pride to ask for his help, he recognizes her as his mate. Powerless to resist her beguiling temptation, he'll do anything to protect her. Even if it means going back to the Dark Lands—alone.

Betrayal:
Betrayed by love, Wesken won’t risk his heart again. Not even for the beautiful Amalija who is convinced she’s his mate. But she can’t be. His true mate was a traitor—and is long dead.
After years of abuse, Amalija is determined to forget her past. But when it catches up to her, threatening her new pack she has no choice. Even if it means losing her mate.

Wrath:
The last thing Roxie wants to do after being rescued from her abusive pack is to ever set foot in the village she’d once called home again. Memories too horrendous to contemplate have kept her frozen in a place where fear keeps her prisoner just as surely as her captors had. But if she wants a life with her new-found mate, she’s going to have to fight for it.
The day Orrin found his mate in the forest, beaten and starved, he’d known she was destined to be his. But when the evil creature he’d thought expunged from his soul resurfaces, threatening not only her, but their entire pack, he must choose—stay and risk hurting her in one of its murderous rages—go back to the Dark Lands. Alone.

Burden:
For three long years, Violet was held captive, beaten, and starved. The only thing that kept her going during the last few months was the innocent life growing inside her. When a neighboring pack swoops in and rescues her, she has to decide if she’s going to live in fear or risk her body—and her heart—to claim her true mate.

The instant Joss caught the scent of the woman in the dilapidated shed on the outskirts of the Mahehkan lands he’d known she was his mate. Now she’s in his home, and her body is healing. But it takes a lot more than disappearing cuts and bruises to repair the damage done to her. He’s determined to do whatever it takes to make her whole again—even if it means losing her in the end.

'Dark Wolves' is tagged as: