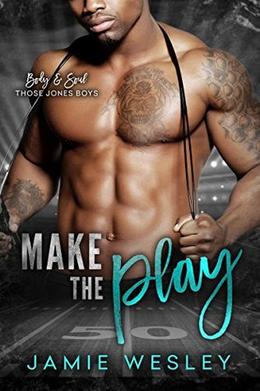 Make The Play (Body and Soul: Those Jones Boys #1)

After signing a contract that made him the highest paid wide receiver in the game with his hometown team, Carter thought life couldn’t get any sweeter. But he’s dropping passes in games and hearing the boos from the fans. Worse, his oldest brother/roommate keeps butting into his business. He needs a new place to stay. Today. When he drives by an open house, he thinks his luck is changing. When he meets the beautiful real estate agent, he knows things are looking up—even if she wants nothing to do with him.

Gabby Stephens has had enough of rich guys. She’s ready for her a fresh start and has no time for playboys, even the ridiculously hot ones. But when her bills start piling up, finding a home for Carter becomes her top priority. Her second priority? Ignoring her overwhelming attraction to the pro athlete.

In this game of love, Carter’s more than ready to make the play to win over Gabby.
more
Bookmark Rate Book
Amazon Other stores

The 'Body and Soul: Those Jones Boys' series

Similar books to 'Make The Play'

All books by Jamie Wesley  ❯

Buy 'Make The Play' from the following stores: