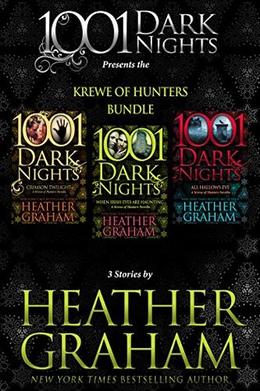 It's a happy time for Sloan Trent and Jane Everett. What could be happier than the event of their wedding? Their Krewe friends will all be there and the event will take place in a medieval castle transported brick by brick to the New England coast. Everyone is festive and thrilled . . . until the priest turns up dead just hours before the nuptials. Jane and Sloan must find the truth behind the man and the murder—the secrets of the living and the dead—before they find themselves bound for eternity—not in wedded bliss but in the darkness of an historical wrong and their own brutal deaths.

When Irish Eyes Are Haunting

Devin Lyle and Craig Rockwell are back, this time to a haunted castle in Ireland where a banshee may have gone wild—or maybe there's a much more rational explanation—one that involves a disgruntled heir, murder, and mayhem, all with that sexy light touch Heather Graham has turned into her trademark style.

Salem was a place near and dear to Jenna Duffy and Samuel Hall -- it was where they'd met on a strange and sinister case.
They never dreamed that they'd be called back. That history could repeat itself in a most macabre and terrifying fashion.
But, then again, it was Salem at Halloween. Seasoned Krewe members, they still find themselves facing the unspeakable horrors in a desperate race to save each other-and perhaps even their very souls.
more
Amazon Other stores
Bookmark  Rate:

'Krewe of Hunters Bundle: 3 Stories by Heather Graham' is tagged as:

All books by Heather Graham  ❯

Buy 'Krewe of Hunters Bundle: 3 Stories by Heather Graham' from the following stores: