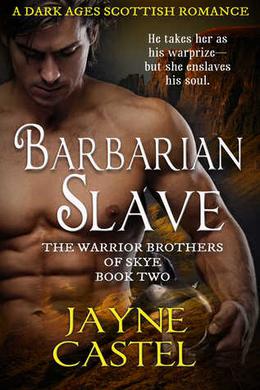 He takes her as his warprize—but she enslaves his soul. Pict and Roman culture collide in this epic Historical Romance set in Dark Ages Scotland.

Lucrezia is the wife of a Roman soldier posted on the northernmost reach of the Empire. Locked in an unhappy marriage upon a desolate outpost, her hopes for happiness are slipping away. However, her life changes forever in the winter of 467 AD. Barbarians from the north band together and attack Hadrian's Wall.

Tarl mac Muin is a Pict warrior with a thirst for battle and glory. He's part of the Barbarian Conspiracy that will change history. But when he takes Lucrezia as his slave, he sets off a chain of events that neither of them could have foreseen.

In an epic adventure that starts at the Roman fort of Vindolanda at Hadrian's Wall and takes Lucrezia north to the wild shores of the Isle of Skye—she discovers love and happiness when she least expects it. Only, a shadow from the past risks ruining everything.

'Barbarian Slave' is tagged as:

The 'The Warrior Brothers of Skye' series

Awoken
Awoken
(The Sisters of Kilbride #2)

All books by Jayne Castel  ❯