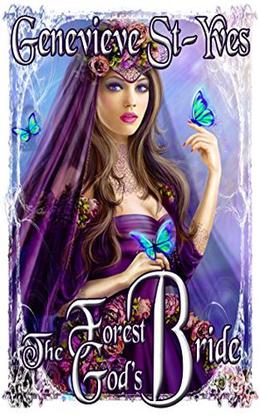 The Ancient Pact Must Be Sealed With A Marriage

Chosen to act as a sacrificial bride by her coven, Eva journeys into the mystic realm of the In Between in the heart of the Night Forest. As a powerful witch with mastery over healing magic, the body holds no secrets for her. But the heart…that remains a mystery. She has no intention of forging a relationship with Eckhard, her groom and prince of the forest gods. Yet his patience and chivalrous nature compels her to let down her guard.

Just as much a pawn as Eva in the machinations of the gods and witches, Eckhard must overcome Eva’s reluctance to forge a bond—their union is key to restoring the gods’ waning power – even as he struggles against lingering feelings for his own lost beloved. Eva’s gruff kindness and hidden vulnerability arouse feelings that make him believe that they can transform an arranged marriage into a real union.

The Swamp King, the enemy of the forest gods, harbors an unrelenting desire to conquer the Night Forest, and with it, to destroy Eva and Eckhard. Only the witch and the prince stand a chance of defeating the monstrous Swamp King and saving their two worlds from his malevolent influence. Will it cost them their blossoming love and their lives?
more
Amazon Other stores
Bookmark  Rate:

'The Forest God's Bride' is tagged as:

All books by Genevieve St-Yves  ❯

Buy 'The Forest God's Bride' from the following stores: