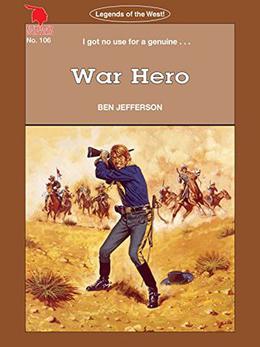 “Sit down and have a drink.”

The man shook his head. “No, thank you, Cap’n — thanks all the same, though it’s an honor to be invited to share a drink with a genuine War hero. I would have once though, you know? I’d have likely given a month’s pay to say good day to Cap’n Cleve Blaisedell a few years back, mebbe a year’s pay to be able to say that I sat down and had a drink with him. Yessir, that sure would have been somethin’ . . . once.”

Blaisedell studied the man, who still had the look of a soldier.

“That’s right.” The words were starting to slur. “You were just about the biggest man in the Cavalry back then, Cap’n. There wasn’t a man who wouldn’t have ridden with you, even if you planned to ride all the way to Atlanta through Beauregard’s army.” The man hiccupped and said accusingly, “But you sure let us down, didn’t you, Cap’n? The man we all looked up to turnin’ into a lousy gunfighter. That was somethin’ for the Johnny Rebs to crow about, wasn’t it? You know, Cap’n, I know fellers who spit on the floor when they hear your name. And you know somethin’ else? I’m one of ’em!”
more
Amazon Other stores
Bookmark  Rate:

The 'Legends of the West' series

All books by Ben Jefferson  ❯