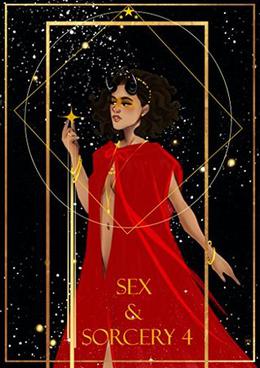 "Rogues In The Night" by EC Revelle - Ky's neck is on the chopping block, and her only chance at life is robbing the manor of a mysterious recluse. Deep in the house, the master has chained a terrible power. Releasing it could be Ky's only hope, but the cost might be higher than she's willing to pay...

"Welcome To The Family by Guinevere A Hart - Alone and isolated, Claire is the only human on an unwelcoming elven island. Then one day a mysterious stranger changes her life forever.

"The Edge Hive's Prisoner" by Edmund Hughes - After a failed uprising, Glennard Ardstone is imprisoned by Katara, a powerful elven lady and the Empress's cousin. Vulnerable and at the mercy of his intriguing captor, he's forced to make a choice between loyalty and temptation.

"The Chained Goddess" by Olivia Matin - A princess seizes control of her destiny and, with the help of her former love, plots to avoid an arranged marriage. However, the ritual they must perform may reveal his dark, inhuman secret.

"Statues And Suitors" by Dragon Cobolt - Brax the Golden will become one of Purgatory's greatest generals. But first he must fall in love and break a curse.

"Blood Sacrifice" by Chloe Tzang - A sword-fighting heroine betrayed and sold into an arranged marriage by her father meets a hero searching for the girl of his dreams in a story of violence, magic, love and passionate sex.

"Wasted Years" by Nathan Ravenwood - Rorzan hasn't Sung in years. Now, after a glimpse into another world, he finds an alien music that allows him to Sing again: heavy metal. But what will he gain - and lose - by using his newfound power?

"Valkyrja" by Mak Long - Wounded and alone in a hostile land, a soldier must choose between life and death, duty and sacrifice.
more
Amazon Other stores
Bookmark  Rate: