For You I Will 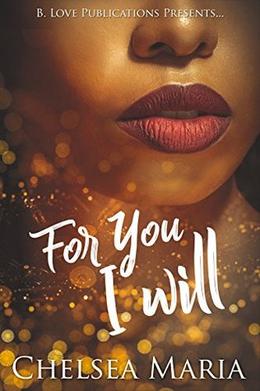 Andre Joseph learned at a young age what it meant to cleave to another soul. Since the age of 15, he has sacrificed his happiness and placed his dreams on hold to make sure the one he cleaved to the most lived out their dream. Being a producer under his best friend's record label came with a lot of perks… except true love. His desires for love went beyond the lyrics he wrote. He craved it like the air he breathed.

Landon Carter had it all. The money, cars, clothes and a plethora of women. Being COO of a major record label, Landon has seen first-hand the lengths women will go to just to attach their name to his. Tired of the lies and deceit, he takes his heart off the market and hardens it instead.

Set out on being struck by Cupid's arrow, Andre opened himself up for love unlike his best friend Landon. Only thing, well person, stopping him is a Kenyan beauty by the name of Dafina whose own insecurities cause Andre to rethink if the fight for true love is worth it. Being the scrooge of love, Landon thought the black ice surrounding his heart would never melt. That is… until he meets an unlikely spirit housed in the woman he least expects that causes him to rethink the true of meaning love.
more
Amazon Other stores
Bookmark  Rate:

Similar books to 'For You I Will'

Buy 'For You I Will' from the following stores: