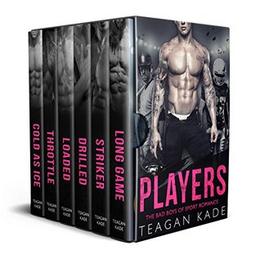 Book #1 – Long Game (Top 50 Amazon best-seller)
I go long, I go deep, but I never go soft.
They call me ‘The Damage’ because I crush it on the field and off.
I’m all about the offensive penetration. No one knows the game as well as I do.
It doesn’t hurt I’ve got a goal post in my pants.

Book #2 – Striker
She’s the perfect score. I’m a dirty player. It’s complicated.
Scarlet's always been a stunner. There was a time we could have been together, but then came the soccer, the fans, the fame... I lost her to my twin brother, Josh.
But Josh is a cheating bastard. I can't stand by and watch Scarlet suffer, not when she should’ve been mine all along.

Book #3 – Drilled
He’s the gridiron god with magic hands…
…And fingers, and mouth, and tongue.
Chance ‘Gunner’ Adams –- quarterback, superstar womanizer, and panty slayer extraordinaire. He wants me. He wants me bad, but I’m not about to become another notch on his girthy bedpost.

Book #4 – Loaded
He’s got the biggest bat on campus… and he knows how to use it.
Asher Slade, AKA ‘Slugger’.
Hellcats captain, shameless womanizer, and grade A as*hole.
I can’t stand his kind, so imagine my joy when I’m tasked with babysitting Sir C*ck-A-Lot during his college-imposed community service.
He thinks I’m easy, that I’m going to fall to my knees the same way his opponents do.
But he’s wrong.

Book #5 – Throttle
I only know one position—on top.
I do whatever it takes to win. That’s why I’m a Formula One champion. And I’m going for the prize again this year, no matter what my team says. But I’ll play their game—so long as it benefits me.

Book #6 – Cold As Ice (Never been released!)
A Russian figure skater. An American ice hockey bad boy. The 2018 Olympic Winter Games and the eyes of the world. What could go wrong?
more
Amazon Other stores
Bookmark  Rate: