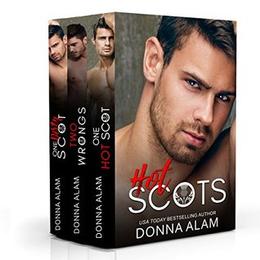 What does a Scotsman wear under his kilt?
On a good day, lipstick!

Rory and Fin, One Hot Scot

‘Do you have a little Scots in you? Would you like to try a good few inches?’

Fin has ninety-nine problems. Quite literally.
She's lost her husband, her job, recently avoided jail time, and is back living in the place she's always loathed . . . when problem #100 walks in.

‘Get on your knees, like the good girl you pretend to be.’

When Ivy is summoned back to LA by her secret husband, it’s for revenge, not a second chance. But Ivy’s never told anyone she even has a husband, let alone he’s the Scots born movie star, Dylan Duffy.

Kit and Bea, One Dirty Scot

‘The man is a wolf. A devil in a Savile Row Suit. I’ll never survive him.’

He’s dirty, hot, and Scottish.
Hear him speak and you’ll understand. So. Damn. Sexy.
He wears a suit like a hooker wears lingerie. For the business of temptation.
An Amazon Top 50 performer!

Bonus! A wee check in with Natasha!

It’s not the age of the pizza delivery boy that matters. It's the staying power of his salami

As the saying goes, the Scots are temperamental. Half temper, half mental. And none more so that nutty Natasha!