You Were too Busy Lovin' Someone Else: A Standalone 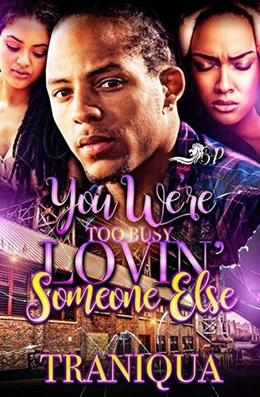 Some have a lot of questions about what life looks like with three serious partners. Some may assume that when three people are in a relationship together that they all love each other and get alone perfectly, yet that isn’t
the case with Jamod, Keayana, and Cha’Nae.
Living with two beautiful women at one time, Jamod is living the life most men would kill to live for however, loving two women is more work than he thought it will be. The constant need of communication, consistency, and reassurance is a must with women who both have the tendency to become jealous of one another.
Being with Keayana for ten years Jamod feels obligated to be with her after she held him down while locked up. But, meeting and falling in love with Cha’Nae he didn’t want to go another day without her. So, he sat Keayana down and gave her an ultimatum about his other woman. In fear of losing Jamod all she could do was agree.
Now, Keayana is regretting the decision she made and wants Jamod all to herself but, it’s only one thing stopping her, Cha’Nae. Keayana is fighting her way claim to Jamod’s whole heart. Is it too late for her to put her foot down and take her spot as Jamod’s one and only?
Cha’Nae loves the thought of being in love but, the constant fighting and competition is becoming more than she can handle. She loves Jamod but, often finds herself questioning is love enough for her to stay?
Three lives come together, through love, murder, and deception. With many twist and turns what will Jamod do to keep both of his women happy? Will they remain one big family? Or will Jamod finally settle for one? Who knows what will happen in this twisted relationship.
more
Amazon Other stores
Bookmark  Rate:

Similar books to 'You Were too Busy Lovin' Someone Else: A Standalone'

More books like 'You Were too Busy Lovin' Someone Else: A Standalone'   ❯

Buy 'You Were too Busy Lovin' Someone Else: A Standalone' from the following stores: