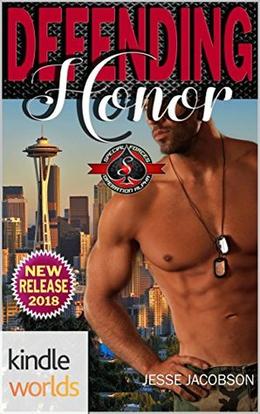 A man from Honor’s past has been found murdered in his downtown apartment.

It had been just over a week since the man convicted of raping Honor Saunders when she was just fifteen had been released from prison, and now he was dead, a victim of multiple stab wounds.

Less than a full day after the body was discovered, Honor was arrested for the murder. Street cameras captured her entering the victim’s apartment building less than an hour before the time of the murder. Police found the victim’s blood on her clothes. Her hair was discovered on the body. Authorities recovered the murder weapon, a steak knife from her kitchen. It was an open and shut case for the District Attorney. There was only one problem: Honor swears she didn’t do it.

With her husband, Navy SEAL Trevor Saunders, wounded and recovering in a hospital in Iraq, Honor turns to close friends, Matthew “Wolf” Steel and his wife, Caroline, for help.
more
Amazon Other stores
Bookmark  Rate:

'Defending Honor' is tagged as: