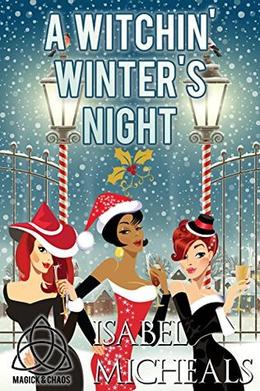 Cecelia loves Christmas. It’s her favorite holiday of all time. Maybe, it’s because she spends the majority of her year as a necromancer reviving the dead. Or, maybe it’s because the Fates misunderstood her true destiny. Either way, she refuses to dwell on the present or the past. Instead, she simply hosts the best Christmas Eve party her friends have ever seen.

Scroogess Ebesneezer is the new Christmas Witch in town. She has a score to settle with three meddling witches who have been a thorn in her side since the day they met. When she discovers they’ve been abusing their powers, she decides to exact her revenge.

The challenge is simple. Shop with the humans on Christmas Eve without using their magic. Or, spend the next five-to-ten years in the pokey as retribution for their crimes.

There’s only one problem. It seems as though Scroogess has been harboring a secret of her own. When Cecelia, Symone, and Camille uncover it—it’s game on.

Warning: A Witchin’ Winter’s Night involves a Sugar Plum Fairy whose Christmas crazy. Two witches ready to do battle in Wally World. And, three ghosts determined to help a witch find the Spirit of Christmas.

Note from the Author:

'A Witchin' Winter's Night' is tagged as:

Buy 'A Witchin' Winter's Night' from the following stores: