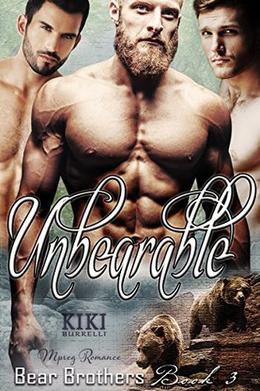 Sent on a mission to secure resources for their bear pack, alpha shifters Julian and Hugh are fine as long as they are together. Which they normally are. So much so, that people forget they aren't actually brothers.
Julian can't wait to get out of Mexico, but he would follow Hugh to hell and back. He's convinced he has a lead on cheap natural resources that the pack cannot pass up. They go searching for the man who can help them. The last thing either of them expects is to find their mate in the back room of a bar in Mexico.
Logan is a man who goes where the wind, and his desire, takes him. He abandoned his career as an ER doctor when one madman took away every person he cared for. Now, Logan travels the world, doing what he can to avoid relationships while never sleeping more than one night in a stranger's bed. That's okay for him since the world has so many beds.
Except, then he meets two, gorgeous men who tell him he's their mate. Everything inside of Logan tells him to run, but the bear brothers are always there to bring him back. They say they want his help, but Logan knows they want much more.
Unbearable is the third book in the Bear Brothers series. It can be read alone but would be enjoyed in order.
more
Amazon Other stores
Bookmark  Rate:

'Unbearable' is tagged as:

All books by Kiki Burrelli  ❯

Buy 'Unbearable' from the following stores: