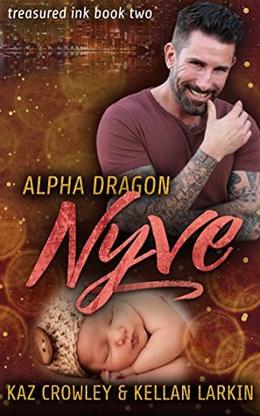 As an older dragon, Nyve's been waiting years for his fated mate. He just didn't think he'd be so... young. Austin is the breath of fresh air the alpha dragon needs, but Nyve can't help but worry about the age gap.

Austin feels stifled by his overprotective aunt, who took him in after his mother died mysteriously. As a half dragon, half wolf shifter, he's never felt like he's fit into either world. But he misses his mom—and meets his fated mate when getting a tattoo to remember her.

As Austin strives for independence while also learning to accept his mate, the guys at Treasured Ink learn more about a mysterious organization with a sinister motive attacking mythical shifters.

It's up to the dragons to get to the bottom of this—before someone they love gets hurt. And in the midst of it all, Nyve struggles to give his young mate the space he needs, while controlling his fear that he'll lose the one thing he's been waiting his whole life for.

Alpha Dragon: Nyve is the second in a steamy new mpreg romance series centered around alpha dragons who love ink and getting inked. Each couple gets a HEA, but the books are best enjoyed in order. Warning: this book is so hot it’ll scorch your pants off!
more
Amazon Other stores
Bookmark  Rate:

'Alpha Dragon: Nyve' is tagged as:

All books by Kaz Crowley  ❯