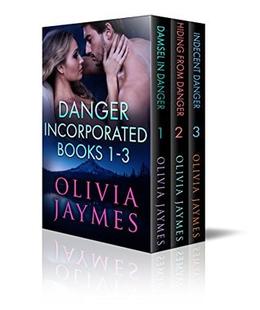 DAMSEL IN DANGER:
One sultry summer night, Brinley Snow gathers up her courage and asks her gorgeous neighbor to join her for dinner. She and Jason are instantly attracted to one another but the evening quickly goes down hill when she ends up in the interrogation room of the local police. An unknown dead man had her address clutched in his hand. The authorities – and Jason – think she’s the key to finding a cold-blooded murderer.

With a first date like that Brinley’s not sure she’ll survive a second. Then again she’s never met anyone like Jason. The ex-DEA agent is not the typical boy-next-door. He’s all man. And with a little luck, he could become all hers.

They just have to stay alive long enough to catch a killer.

HIDING FROM DANGER:
Georgette “Gigi” Sidney is a woman on the run. Her ex-boyfriend’s love was controlling, obsessive, and deadly. Now she’s hiding out in Tremont, Montana spending her days as a waitress and her nights in West Anderson’s bed. She ought to be moving on to the next town but her feelings for the handsome detective have complicated her plans.

When Gigi’s past interferes with the present she has to finally tell West the truth…about everything. She needs twenty-four hour protection and he’s just the man for the job.

If West has his way there will be no more running, no more excuses, and no more lies. He’s determined to put the past to rest so that he can be her future. All he has to do is catch a madman and keep her alive while doing it.

INDECENT DANGER:
Successful businessman Travis Anderson is thrilled to be escorting Aubrey Grayson on a romantic and elegant weekend getaway in Florida. Unlike the women before her, she doesn’t care about the beautiful gowns and fancy jewels. What she does care about is bumping into a hateful man from her past who decides it would be fun to tell Travis all the shameful secrets she has tried so hard to hide.

When a dead body shows up as an uninvited guest, Aubrey quickly becomes a suspect and has to come clean to Travis about everything. Nothing in the world could be worse than admitting the whole sordid story… unless it’s being branded a killer.

But there’s no way Travis is going to allow Aubrey to go to prison for a murder she didn’t commit. If he has to catch the real killer himself, that’s just what he’ll do.
more
Amazon Other stores
Bookmark  Rate:

'Danger Incorporated Books 1 - 3' is tagged as:

Touch Him
Touch Him
(ManTrap #3)

All books by Olivia Jaymes  ❯