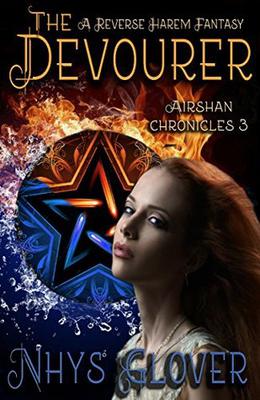 They’d found the key that would return the newly released Devourer back to the underworld. They’d forged a bond of love and respect between five powerful but very different mages. They’d even begun to explore the incredible powers that bond has given them, which would help them defeat the primordial evil intent on drowning the world in another global flood. What they didn’t seem to be able to do was keep that hastily formed bond from unravelling and undermining everything they’d achieved. And not even the Goddess of All Creation could tell Flame if she’d survive long enough to enjoy the love of four very attractive men. That was the problem with being a Champion of the Goddess- no job security!

If you aren’t into love stories with lots of steam, don’t read this book. If you aren’t interested in fast-paced, exciting stories with lots of twists and turns, don’t read this book. However, if you’re open-minded about how love is expressed (at least in fiction) and don’t mind staying up late to read just one more chapter, then read this book. If you can handle MMFMM action (one woman four men) always tastefully done, of course, READ THIS BOOK NOW! And if you don’t like steamy sex but do like a great story, then speed read through the sex scenes. Just because they’re there doesn’t mean you have to read them, after all!
more
Amazon Other stores
Bookmark  Rate:

'The Devourer: A Reverse Harem Fantasy (Airshan Chronicles)' is tagged as:

All books by Nhys Glover  ❯

Buy 'The Devourer: A Reverse Harem Fantasy (Airshan Chronicles)' from the following stores: