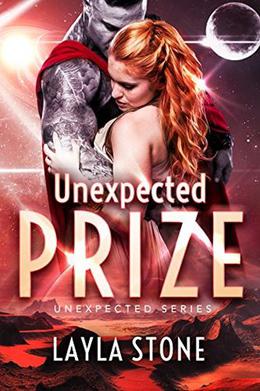 He was born to fight in the gladiator arenas until the day he died.

On a desert planet is an alien race of angny-gladiators; chief among them is Jarr-o, a brutally scarred champion who wants to change his future. Instead of fighting to the death in the Chancellor's famous arena, he wants to train the new warriors. But his life was rocked by one small fierce female from Earth.

Cara was raised as a spy on Earth and used by the mob until she was no longer needed and sold to space traders. Years in a cage she finds herself being used as payment to a scarred alien gladiator with dark grey skin and tusks.

Jarr-o is unprepared for the emotional battle of wanting a woman who refuses to obey him, while being hunted by an unknown fighter determined to win his title in a death-match. Struggling between his desires and Cara's rebellious nature, he is blindsided by a token from his past. As the mystery unfolds - the unknown fighter makes himself known and Jarr-o has to find a way to win a fight specifically designed for him to lose everything…but if he wins, his unexpected prize will restore his broken heart and soul.

Note to readers: This is a Sci fi romance contains a lot of action (hand-to-hand battles between alien gladiators), determined alpha male gladiators and a sweet, sassy and steamy romance (between a fierce Earth spy and a scarred alien warrior). So if you like it fast, rough and sexy this series is for you.
more
Amazon Other stores
Bookmark  Rate:

'Unexpected Prize' is tagged as: