She’s Not Just A Snack....She’s A Whole Buffet: BBWS Do it Better 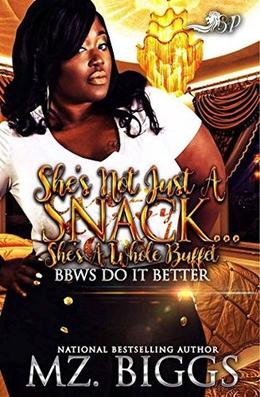 Big. Beautiful. Woman. That’s what everyone thinks when seeing the acronym BBW. Karizma, on the other hand, considers herself as being so much more. Brilliant. Bold. Witty.
Karizma could think of several words to break BBW down. For the right man, she could be Bare. Bendable. Wet. However, she chose to break it down, she’d do it without taking away the fact that she was all woman. A woman that was confident in herself and didn’t care what others thought of her. Growing up in poverty, she learned at an early age that she had to remain humble and never give up on something that she really wanted. The one thing she wanted, that she didn’t have, was a man. While she didn’t need a man to make her feel complete, she was over going home to an empty bed every night.
Maurice was the man that Karizma wanted in her life. She’d had a crush on him ever since high school, but was never able to express that to him, because he’d done everything in his power to degrade her and bring her self-esteem down. When he saw that he couldn’t break her, he figured that if he couldn’t beat her, then he needed to join her. While Karizma continued to push him away, Maurice was determined to do any and everything in his power to get her.
Lena and Renae were more than Karizma’s best friends; they were her sisters. The only problem was that out of all the people that Karizma could’ve ever thought would betray her, she never took them as the type to be disloyal to her. Knowing that Karizma would never be able to forgive them, they did whatever they could to keep their secret tucked away between the two of them.
This book is a true depiction of how you should never judge a book by its cover. Karizma was the total package, and nobody could tell her otherwise. Follow her as she shows the world that She’s Not Just A Snack... She’s A Whole Buffet.
more
Amazon Other stores
Bookmark  Rate:

Similar books to 'She’s Not Just A Snack....She’s A Whole Buffet: BBWS Do it Better'

More books like 'She’s Not Just A Snack....She’s A Whole Buffet: BBWS Do it Better'   ❯

Buy 'She’s Not Just A Snack....She’s A Whole Buffet: BBWS Do it Better' from the following stores: