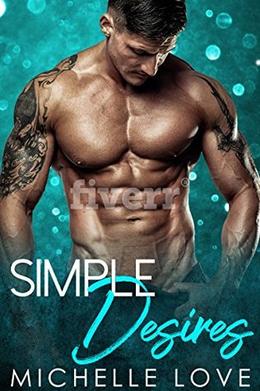 Simple Desires is a billionaire romance collection featuring alpha male, bad boy billionaires and the curvy, feisty women who win their hearts. Get your copy today for only .99c for a limited time only.

The Doctor’s Magic Hands
She admits it. Sandra Marshall, successful criminal attorney, the woman with her nose to the grindstone ever since law school, is attracted to brilliant, young cardiac surgeon, Mark Cartwright. Since her last relationship went down in flames, she’s buried herself even more than ever in her work. But Mark Cartwright not only saves her father’s life; he’s reopened her eyes to the world. But can the two workaholics find a way to balance love and constant work?

The Nanny’s Gentleman
I am hurt. I am broken. I opened myself up to love once in my life, and when I lost that love, I Almost lost everything.
I have a young son, and he is my world. I want to give him everything, but I have nothing left to give.
She is beautiful. She is perfect. She is everything my son needs in a nanny—in a mother.
There is something about this girl that haunts me. Perhaps she is more than what my son needs.
Perhaps she is more than just a young nanny living under my roof for a few months.
No, she is more. She is everything and she is perfect.

Doctor’s Demands
The Doctor’s arrived…And his treatment is sizzling!
She’s a young college student, set on a scrupulous career as a school teacher.
I’m a doctor with a checkered past.
Binge drinking on weekends, sleeping with women I care nothing for, and seeking summers with women I rent, has been my life. Until I saw her face on the club’s website.

Evergreen
In the beautiful evergreen state of Washington, the uber-rich send their teenage and young adult children to the exclusive private Auburn College of Fine Arts. The students, teachers, and parents’ lives are torn apart one summer’s day when a horrific school massacre takes place.
In the aftermath, a young English teacher, Emory Grace saves the life of billionaire Luca Saffran’s daughter, Bree, a heroic act that leaves her seriously injured, and which changes everyone’s lives around her. Emory and Luca’s attraction soon turns to love, but can they escape the repercussions of the school horror and live happily ever after?

His Beautiful Revenge
NORAH, a beautiful, young graphic designer, is convinced her boyfriend LUCIAN is having an affair but as yet hasn’t been able to prove it. Miserable in her relationship, she throws herself into her work, and through it, meets an enigmatic billionaire, GIACOMO, who hires her to design the marketing campaign for his new tech. There is an instant attraction, but Norah is determined not to sink to Lucian’s level and denies herself, even when Giacomo makes it clear he wants her.

'Simple Desires: A Billionaire Romance Collection' is tagged as: