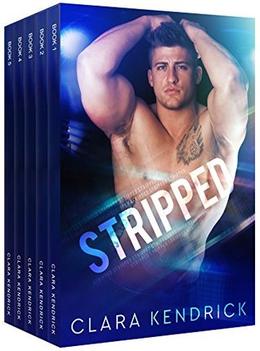 CRUZ
Cruz Cabrera moved to Las Vegas to pursue his dream of becoming a professional dancer. He'll jump through every hoop to get there, even the ones that wear him down, like dancing for Skin Deep. But when a feud with the ball-busting owner threatens everything, Cruz takes Edie, his best friend, with him to work at Grind — another strip club with a different agenda. Cruz thinks this could be the place for him, but his own insecurities start catching up with him — and threatening his happiness, his future, and his relationship.

FINN
Finn's already juggling a successful career as a tattoo artist and one of Grind's talented male dancers. What none of his friends know, however, is that he also has a hidden facet of his life — a popular painter with a secret identity and large following online. But when beautiful Ayana, a fellow artist, enters his life, poised to rip down the veil that separates his online persona with his actual life, Finn is faced with an identity crisis — which life does he actually want to live?

GRAYSON
Grayson Vaughn never dreamed he'd fall for the girl next door — literally. Lake Vasquez is the entire package: beautiful, smart, a writer, and Grayson's next door neighbor. They're helplessly attracted to each other, but Grayson's work could prove to be an insurmountable challenge to the bourgeoning relationship. Could Lake ask him to change for her? Can Grayson put true love before everything else?

DENVER
Denver Walls has always been a dreamer, hoping to make it big in the music industry. Until that happens, though, he's more than content to dance at Grind with the rest of his friends to make rent. Then, instead of a big break in his musical career, a big shock lands right in his arms — Zora Carey, a pop starlet with a residency in Las Vegas. He's already a big fan of hers, but Denver never expected the fact that she might become a fan of his, too. All he has to do is convince her that they're not as different as she thinks, even as their lives — and secrets — threaten to tear them apart.

MADDOX
Maddox Levine grew up in Las Vegas, and his one and only goal was to own a club like the kind he and his childhood sweetheart, Wren Wong, were fascinated with. But with the city rising up against properties it deems seedy, and with his friends worried about his complicated relationship with Wren, Maddox is afraid it's only a matter of time before his dreams — every last one of them — come crashing to the ground. It's Wren who comes to the rescue, but her price for helping might just be too high for Maddox to survive.
more
Amazon Other stores
Bookmark  Rate: