Falling for the Viscount (The Seven Curses of London #6) 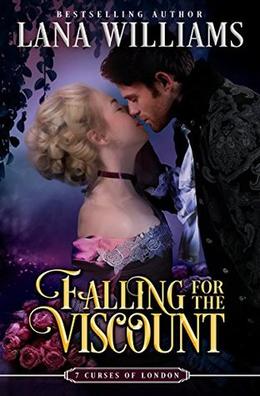 A reckless lady. A reluctant viscount. What will they risk for love?

Spencer Campbell, Viscount Rutland, keeps the world at arm’s length by using his analytical skills for British Intelligence. But when he takes his first field mission to stop one of London’s worst criminals, he realizes the work is far from black and white. Especially when he comes upon a lady he knows far too well in the middle of his assignment.

Dalia Fairchild is appalled to discover her maid is being lured into a life of prostitution. She does all in her power to stop her, even if that means putting herself at risk. The more Dalia learns about the lives of fallen women, the more determined she is to aid them. Crossing paths with Viscount Rutland during her quest causes her to see him in a new light. The maddening boy she used to know is now a handsome man with a dry wit and heated kisses that make her heart stutter.

Dalia’s recklessness drives Spencer crazed, but her genuine concern for the less fortunate has him taking a second look at the lady, as do her big blue eyes and lithe curves. She is not who he thought, and her passion for life—for him—nearly undoes him.

Dalia knows falling for the viscount would be a terrible mistake. Spencer lives by rules she rarely considers. But when the villain they fight puts their lives in jeopardy, both must decide what they’re willing to risk for love.

'Falling for the Viscount' is tagged as:

The 'The Seven Curses of London' series

Similar books to 'Falling for the Viscount'

Buy 'Falling for the Viscount' from the following stores: