Promised To The Plug But Married To The Hustle 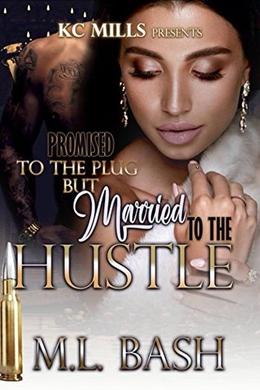 Khaos Eden makes up one half of the Eden brothers… the half that does whatever the hell it wants and has absolutely no regard for what happens to anyone else. Besides his older brother, he has no attachment to anyone. So when he finds himself and a marriage to a woman he's never met the only thing standing between his brother and a bullet, the obvious choice is to suck it up and deal with it. After all, it's his fault his brother's life is even put on the line. He was the one who murdered the only son of one of the most dangerous men in the game. He finds himself engaged to that same man's younger daughter in some ploy to make everything right again and somewhere between dealing with his father who likes women half his age, his new wife's bitter ex-boyfriend and a mother constantly digging in to his illegal affairs Khaos finds himself losing pieces of himself. The one cure? A woman as crazy as he is.

Saiyr Hanje is good at a lot of things. She's good at collecting money, arranging drops and most importantly killing anyone who crosses her. Something she isn't good at? Taking orders. That's why when her father walks in to her room announcing her engagement to a rival drug dealer she has more than a few issues falling in line… until she meets Khaos who, since she's been sheltered from any sort of real relationships, looks like everything she's always wanted dressed in a designer suit. But nothing worth having comes easy and Saiyr soon finds herself struggling to keep up with Khaos, fend off his father's advances, conceive a child to take over their empire and wash away the memory of the one boyfriend she's ever had. When she finds out the one man she's ever truly loved is the same person that took away the only family member that ever cared about her, she's faced with the hardest decision of her life… standing beside her mission, arranged marriage and newfound husband, or avenging her brother and killing the same man that, without her knowledge, gave her a new reason to live.
more
Amazon Other stores
Bookmark  Rate:

Buy 'Promised To The Plug But Married To The Hustle' from the following stores: