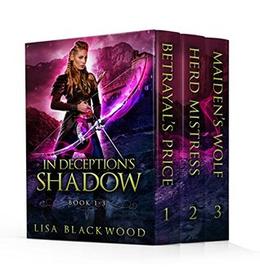 Enemies by nature. Companions by choice.
When unforeseen circumstances force natural enemies to become allies, something far more enduring than animosity is born.

~*~*~ Betrayal’s Price ~*~*~
Warrior-Scout Ashayna Stonemantle has no awareness of her fate until her sentient magic manipulates her into seeking out one of the enemy—Sorntar, Crown Prince of the Phoenix. If she dare trust the word of an enemy prince who is also an avian shape-shifting mage, their souls and futures are eternally linked.

When their willful magic awakens early and forces them into an unbreakable bond, Ashayna and Sorntar are accused of being corrupted by an ancient evil. To prove their innocence, they must work together to discover what happened in the past to pit bondmate against bondmate. As the search for the truth draws them closer together, Ashayna realizes she has growing feelings for Sorntar. But before she can tell him, his tainted power enslaves him.

Faced with an impossible decision, Ashayna chooses to fight for Sorntar’s soul even at the risk of her own.

~*~*~ Herd Mistress ~*~*~
Magic. It turned Sorsha Stonemantle's world on its head. Yet she can't hate magic for without it Shadowdancer, the Santhyrian ambassador, would never have come into her life.

In the days following their first meeting, Sorsha knows Shadowdancer completes her soul. There's only one problem. Any relationship beyond friendship is impossible.

From the moment Shadowdancer encountered Sorsha, he knew she was a Herd Mistress—a rare worker of magic, key to the Santhyrian nation's survival. His first obligation is to protect her and bring her back to the safety of the herd, but when Sorsha is threatened by Lord Master Trensler and his priesthood, they soon discover Trensler serves a darker master, one willing to devour all magic until the world dies. And that evil wants Shadowdancer and Sorsha.

When a second ambush set by Trensler cripples Sorsha’s magic and traps Shadowdancer in the form of a man, they barely escape with their lives. Unwilling to allow her lack of magic to rule her life, Sorsha sets out to teach Shadowdancer that being human isn't a curse. The proud Santhyrian stubbornly tries to push Sorsha away, but when they are endangered once again, they realize they must work together to find a way to heal themselves. If they fail, Trensler’s master will devour first them and then everything else Sorsha and Shadowdancer ever loved.

~*~*~ Maiden’s Wolf ~*~*~
Beatrice, a young healer living on the outskirts of the human port settlement of River’s Divide, simply wishes to hide herself from the searching eyes of the Priesthood of the Revealing Light. The last thing she wants ‘revealed’ is that she is host to a Larnkin—a spirit creature of vast and forbidden magic.

Her already complicated life grows more perilous when a lupwyn scout stumbles into a trap set by the priesthood. If she sits back and does nothing, the wolf-like shapeshifter will be drained dry by the priests until he is an empty, soulless slave. As a healer, that isn’t something she will allow. But lupwyns have no love for the newly arrived humans.

For the sake of mutual survival, Beatrice hopes this lupwyn can see beyond the hatred caused by two warring peoples. If not, she might die at the hands of the male she is trying to save.
more
Amazon Other stores
Bookmark  Rate:

All books by Lisa Blackwood  ❯