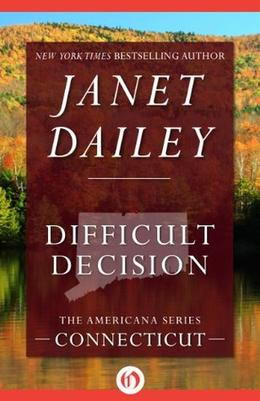 Every novel in this collection is your passport to a romantic tour of the United States through time-honored favorites by America’s First Lady of romance fiction. Each of the fifty novels is set in a different state, researched by Janet and her husband, Bill. For the Daileys it was an odyssey of discovery. For you, it’s the journey of a lifetime. Your tour of desire begins with this story set in Connecticut.

Zane Wilding is a man with a heart of marble. And, until the day of her job interview, Deborah hadn’t believed anyone could be as cold and hard as Zane Wilding. Now he is her boss; the most demanding boss she has ever had. His good looks don’t make up for the iciness with which he treats her, everyone, and even his wife. But soon Deborah learns the secret behind Zane’s behavior - a secret that will cause Deborah’s heart to discover her feelings for him.
more
Amazon Other stores
Bookmark  Rate:

'Difficult Decision: Connecticut' is tagged as: