Bargain for Baby (Cowboys and Angels #10) 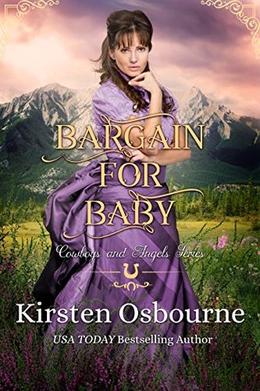 Becky Brown knew she’d made a mess of her life. Eight months pregnant, and her fiancé has been dead for almost that long. After her parents kick her out, she moves into a boarding house and helps the kindly woman there with chores for half her rent. She wants what’s best for her baby, but how on earth is she supposed to provide it?
When handsome stranger, Amos Bowen, shows up at the boarding house and asks her to marry him, her first instinct is to tell him he’s lost his mind. Instead, she finds herself married to him three days later. Can this couple survive the bitterness of her parents, a visit from his mother, and an early baby? Or will they break under the pressure?
more
Amazon Other stores
Bookmark  Rate:

'Bargain for Baby' is tagged as:

The 'Cowboys and Angels' series

Similar books to 'Bargain for Baby'

All books by Kirsten Osbourne  ❯

Buy 'Bargain for Baby' from the following stores: